Thanks to everyone who came out on Tuesday night. We had a lot of fun!

Sensei Jayson, Sensei Kevin, Sensei Cara, and Sensei Marlee would like to wish everyone a very Merry Christmas and all the best in 2017!

Regular classes will resume on Tuesday, January 10 at the regular times.

A couple of reminders of events coming up fast:

Manitoba Provincial Clinic and Tournament – Friday and Saturday, February 3 and 4, 2017 in Hamiota Collegiate, Hamiota, MB – More details on both events to follow soon.

Remember that we are now in Session 2, so fees are due as soon as possible.

In order to streamline communication between the SWKKF and its members, they have set up a “subscription” service much like our web site here. You can select what type of information you wish to receive from the federation and then submit an email address to receive periodic notices. Here is the actual message from Sensei Marco.

In an effort to streamline communications in the SWKKF we are requesting all regional representatives, club representatives and general SWKKF public go to the www.shintani.ca website, scroll down to the bottom and add themselves to the mailing list.
The flow of general communication will no longer go through us, it will go direct.  Keep in mind, there will be times when we will initiate the communication channels (example. “Upcoming Senate Meeting”).
HOW IT WORKS
Visit http://shintani.ca/

Scroll to the bottom to “Subscribe to the SWKKF!”

It is broken this down into 4 sections (users add check boxes to what they want):

… to everyone who attended the grading this week!

Everyone did really well and worked very hard. Congratulations to everyone who received a new belt or stripes as well! Good job!

There is class on Tuesday. It will be the last class before the holidays. We will resume regular classes once school is back in session.

Remember that we are now in Session 2 and fees are due! Please stay up-to-date with your fees. That is how we keep the club running!

The grading will proceed as scheduled tonight.

The grading will take place this Tuesday, December13, 2016 at the regular dojo.

Just for Kicks students should be ready to begin at 6:30 pm.

The Jr/Adult class will begin their grading immediately following the Just for Kicks. Be ready to begin your grading at 7:30 pm. We will likely begin just a little later.

Be prepared and on time. Tuesday evening at 6:25 pm is not the time to be asking the Senseis how to do your kata. They will be busy preparing their grading material, so will be preoccupied already. Once the grading begins, no one will be permitted to leave the floor except when told to do so by the Sensei between sections of the grading.

Be sure to listen carefully to the instructions you are given during the grading. There is a time and a place for “hard and fast”. Always show focus, and spirit, but don’t wear yourself out in the first 30 minutes of the grading.

Classes are still on this evening for anyone wishing to come in for one last class before the grading next week.

Remember… classes tonight are being held from 5:00 to 7:00 pm at the high school. Please use the rear doors by the gym.

Just a reminder that there is a change in class times and location this week.

PLEASE USE THE BACK DOORS OF THE SCHOOL BY THE GYM WHEN ENTERING. Please keep the shoe/boot area neatly organized.

The grading is next Tuesday, December 13.

Thank you to those who volunteered to help out with our efforts at the Dickens Festival this weekend!

The pancake breakfast was a great success this morning, and the Perogie Cart in front of the Coop Food Store has been very busy

Thanks, again, to all those helping out; especially at the last minute when the organizers needed help with the pancake breakfast!

Here are some pics from the pancake breakfast. Pics of the perogie cart to come. 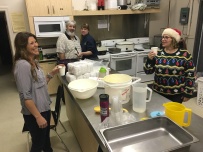 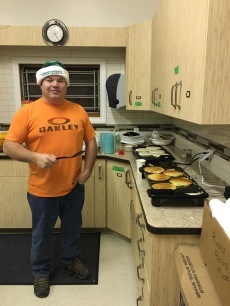 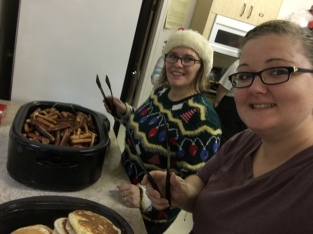 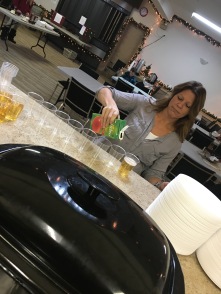 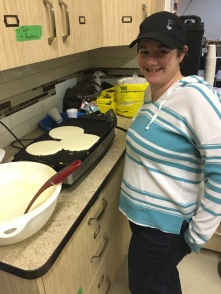 Fun times at the annual bottle drive! #mmkarate
Thank you, Sensei Rolland for all your work with our club and students! Best of luck in Medicine Hat. We’ll miss you.