The last of the duffle bags arrived on Wednesday! We’ll be handing them out in class next Tuesday. They look GOOD!

It was great to see everyone out again! We are officially up to 99 active members for this session! Now… let’s get EVERYONE out to the tournament!

We can’t say enough about how great the tournaments are! Yes, it seems like a scary thing at first but once you’re there and doing it you will really enjoy yourself. Doing your kata in front of 5 judges you don’t know and then doing kumite against an opponent you’ve never seen before can seem like an intimidating experience. However, all of the judges (higher ranking black belts) are there to help make us all better karateka. It is their primary goal to keep us safe and improve our skills. If there is a competitor in kumite who is being overly aggresive, the judges will tell them to back off. When we get a score for our kata we can use it as a bench mark for the next tournament and try to beat OURSELVES at the next event. And one of the most fun aspects of any tournament is meeting other people who share a similar interest to us. We have all been in the position of the rookie tournament participant… not sure where to go; not sure to whom to bow; and trying like crazy to remember even the first move of our chosen kata! We’re telling you now that you have nothing to worry about. Just try to be relaxed and whatever happens… happens.

We’ll be working on tournament prep over the next few weeks in order to get everyone in tournament shape. We REALLY would like to see most, if not all, of us register in the tournament. DON’T WAIT TILL NEXT YEAR! Even if this is your first year just jump in to the deep end and go for it!

We will be adding an ONLINE REGISTRATION FORM this year. When it is ready, we’ll post the link here on the blog.

We’re back in our regular dojo tonight. Class times are also at the usual times.

Remember to think about ways that you can help out with our tournament. We host the Saskatchewan Provincial event so we always want to make it an exciting and memorable event.

It was good to see that everyone found their way to our alternate location last night! Everyone worked hard and should be feeling it in their legs, hips, and quite likely the side of their ribs!

We’re back to the regular dojo next week and we’ll be starting to turn our attention to some tournament preparation. We’ll be asking for volunteers to handle various aspects of the tournament such as but not limited to: prize table, canteen, clothing etc. Also, if you have any thoughts on a unique tournament activity to do with each age/belt division please let a Sensei know about it and maybe we can work it into the tournament.

Just another reminder that karate class will be held at G.F. Kells High School tonight. Regular times are in effect.

Please enter through the rear South gym doors and remove your footwear in the entry. Remember to keep the entry neat and organized!!

Just a reminder that we have to change locations for our class tomorrow night.

On Tuesday, October 22, classes will be held at G.F. Kells High School in Carlyle. Classes are still at the usual time.

See you at the temporary dojo!

We are often asked questions concerning how to care for your karate-gi. So here is a suggestion on how to fold your gi. Washing it is another story entirely.

There are several ways to fold your gi and we are not talking about rolling it up and throwing it into your gi bag at the end of each class!

In some organizations, a student must show proper care for their gi to pass their first belt. They must demonstrate both how to properly tie their belt and fold the uniform in a traditional manner.

Traditionally known as a dogi,  the karate gi was adopted from Judo’s judogi by Gichin Funakoshi. The judogi is a little heavier material and made in a weaved pattern for durability. Funakoshi changed the gi so it would be lighter and removed the weave pattern. The uniform includes the uwagi(jacket), zubon (pants) and obi (belt).

Folding your gi not only makes it easier to put away but it also helps eliminate wrinkles without having to iron it. With each fold you smooth out the material with your hands removing wrinkles and helping to compact the material.

Many of us have our own method of folding our gi. So we looked online at several methods and decided to share this one. This method was chosen because it was artistic, beautiful and utilized all parts of the gi.

Several methods show the components rolled up into a cylindrical shaped log of cloth and tied with the belt. This method was eliminated for two reasons: 1. Rolling your gi does not seem artistic, and 2. It is not FOLDED!!! The key element in traditional gi FOLDING!!!

The following images were taken of a gi in the 2013 IKD Canada Cup program. There is a video following the photos. 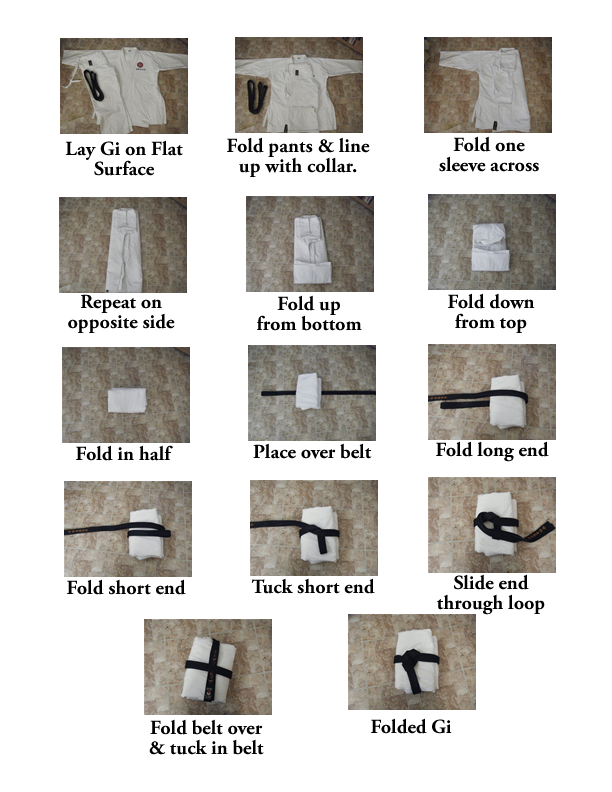 Next week we will be holding our workout at the G.F. Kells High School gym. Classes will be at their usual times.

Please enter through the South doors around the rear of the school. There is parking back there or you can walk around from the street.

This is the same location in which we hold our tournament each year. So it’s a good opportunity to get a feel for the different floor and the different dojo in general.

Good work at our last class. It’s nice to see everyone sweating and working hard. Keep it up!

See you at the high school!

Just another reminder that karate class is tonight!

Just a reminder that karate is tomorrow night! It’s sometimes easy to forget that it’s Tuesday when the kids go back to school after having a Monday off.

So just your friendly reminder that karate class is tomorrow night.

You bow to your opponent before sparring because you respect them.

You should bow from the waist and keep your neck straight, bow not too low, but not a nod of the head either, somewhere in between. The first bow you do when you sit on the ground is to the “Shinzen” in respect to the art of karate. The second bow is to the sensei, to acknowledge them for teaching your style of karate, and the third bow (if there is one) is to your fellow karate students.

The sequence to bowing is lower belt first and then the higher belt bows, as in, if you were a yellow belt, and you had to bow to a higher belt, you would bow first. When you bow, look like you mean it. That way, if you mean it when you respect someone they will know and respect you too.

When you should definitely bow is when someone bows to you.

So when you bow, you should not be thinking about that new toy you want to buy, you have to focus.

The bow is a sign of respect. Respect for your sensei, each other, and all those who came before you and made your art what it is. But notice the sensei is bowing back. Respect is a two-way street, and the best sensei realize that.

It is also a greeting, very common in asian countries, where most of our arts originated.

Thank you, Sensei Rolland for all your work with our club and students! Best of luck in Medicine Hat. We’ll miss you.
#bellletstalk